Looks Like Spring in the Valley, But Calendar Says It's Winter

t’s hard to believe spring is still a month away. As I drive around farm country in the Great Valley, I’m seeing a lot of almond trees in colorful bloom and alfalfa fields shimmering in green.
Almond growers that didn’t apply dormant sprays like copper and oil are seeing 60 to 80 percent bloom in their trees. Dormant sprays will delay bloom. Let’s hope our area isn’t hit with heavy frost or heavy winter storms, which could cause problems with these early blooming trees. That could lead to blossom rot.
Alfalfa is looking good and is long past its winter dormant stage. Farmers will let the alfalfa grow until the first cutting, which usually takes place in mid or late April.
Water officials and cotton growers are certainly checking the weather forecasts regularly and looking toward the skies for signs of more rain in the Valley and snow in the Sierra Nevadas. Rain is nature’s version of pre-irrigation.
Heard on the Farms: Growers in the Westlands Water District received some bad news last week. They won’t be able to transfer the rest of their current water allocation into next season. Since they don’t need the water right now, many farmers are letting other growers have their water to irrigate their winter crops.
About half our growers in our San Joaquin Sustainable Farming Project are in the Westlands district, which covers 600,000 acres of farmland south of Firebaugh (see the district map). Westlands growers have been anticipating a 35 to 50 percent water allocation this season. On Tuesday, the district will have its regular board meeting and I’m sure there will be an update about water availability for 2012. Stay tuned.
In the past couple of years, cotton acreage has been on the upswing with increased water supplies and good commodity prices. Growers had talked about planting more cotton this year. But now, we may see less cotton acreage because of the water issue. Some growers will have to go to Plan B and plant less thirsty crops such as tomatoes using drip irrigation systems to conserve and maximize their water supplies. There’s no need to panic yet. There is still time before that decision will have to be made. Let’s keep that rain dance going.
Field Day Alert: Here’s a great opportunity to learn about dealing with this season’s pest management and water issues in almonds, cotton and alfalfa. SJSFP is sponsoring a free workshop from 9 a.m. to noon the Firebaugh Community Center, 1655 13th St. Firebaugh, on Tuesday, February 28. 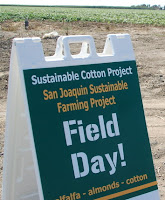 As usual, we will have a great panel of speakers: University of California Cooperative Extension Merced pomology farm advisor David Doll (almonds); UC IPM advisor Dr. Pete Goodell (cotton and alfalfa) and entomologist Walt Bentley (almonds), Chris Linneman, Program Manager, Westside San Joaquin River Watershed Coalition, and Louie Guerra, environmental scientist with the Department of Pesticide Regulation. Three continuing education credits have been approved.
While at the event, growers in Fresno, Madera and Merced counties can sign up to participate in our annual sustainable farming program. I can vouch that SJSFP growers improve their farming practices, increase crop yields and become better environmental stewards.
For more information about the field day or to sign up, contact me at (559) 259-1981 or Project Director Marcia Gibbs at (530) 370-5325.
Posted by Sustainable Farming Field Scouting at 7:14 PM No comments:

While rain is in the forecast for Tuesday, growers in the San Joaquin Valley spent the past couple weeks irrigating water to their thirsty fields.
That shouldn’t come to a surprise to anyone. The mild winter and meager snow and rainfall are certainly big topics of discussion for farmers across the Valley. Last week, the state Department of Water Resources took measurements in the mountains and estimated the statewide snowpack to be 37 percent of normal for this time of year.
It’s the same for much of the country. Consider this fact from the National Climatic Data Center:  The number of record high temperatures set in January exceeded record lows by a 27 to 1 ratio in the lower 48 states. It was the 13th straight month that new high temperatures topped low temperature records in the U.S. In our region, a similar story played out last month. For instance, the Fresno airport recorded a record-tying 68 degrees on January 14, matching the all-time high for that date set in way back in 1948. For the most part, our daytime highs have been in the low- to mid-60s.
But farmers don’t have to panic yet. Thanks to record snowfall in the California last winter, there are adequate water supplies for crops this season. Right now, westside growers are anticipating a 60 percent water allocation – at least for now. Stay tuned.
As I travel around the Valley, I am seeing a lot of activity. Growers have finished preparing the beds for this year’s tomato and cotton season and are starting to pre-irrigate their fields in preparation for spring planting.  Orders are being placed for cotton seeds. Alfalfa plants are being fed nutrients and irrigation water to “wake” them up from their fall and early winter dormancy.
In the orchards, almond trees already have emerged from of their winter rest period. The fruit buds are starting to expand as they head toward bloom and flowering stages. This development cycle could speed up if this warm weather keeps up.
The commercial beehives (those white boxes you see around almond orchard floor) are in place as the pollination period nears. About two hives per acre are needed to pollinate the almond flowers this spring. Experts estimates about 1.5 million of the nation’s inventory of 2.5 million honeybees will be needed to pollinate about 800,000 acres of almonds in California this season. That’s about 60 percent of the U.S. inventory of bee colonies.
Almond growers have found bee rental fees rising in recent years, partly due to a significant loss of bees because colony collapse disorder. Beekeepers estimate 30 percent of bees are loss annually. What has that meant to almond growers?
Well, the average pollination rental rates surged more than 160 percent from $58 for each hive in 2004 to $151 per hive in 2010, according to the California State Beekeepers Association. If you do the math, that’s going from $116 per acre to $302 an acre to pollinate your almond orchard. Experts say pollination now amounts to 13 to 15 percent of input costs. Well, growers can take some solace this year: Rates expect to be fairly stable, running in the $155 range per acre. Let’s hope for another record harvest for 2012. That would certainly lessen the financial sting from these high rental costs.
Posted by Sustainable Farming Field Scouting at 9:49 PM No comments: