Get Cracking on Almond Nut Harvest Sampling This Season

If you spotting a woman gathering a sack full of nuts from the ground in almond orchards around the Valley, that person might have been field scout Jenna Horine.

Once again, Jenna is taking almond samples to help growers prepare for next season’s orchard management strategy.  These harvest samples will let growers what pests are in their orchards and helps them compare results from the grade provided by the huller.

UC Integrated Pest Management recommends taking 500 nuts from each orchard block as a representative sample. The nuts are cracked and checked for pest damage.

Jenna tries to collect nuts quickly, trying not to leave them on the ground too long. Otherwise, ants might get to some of the nuts and skew the findings. Jenna collects several thousand nuts from orchards stretching across Madera, Merced and Fresno counties.

She puts the samples in large paper bags and keeps them in a freezer. This preserves the nuts until she begins cracking the nuts and then inspecting each one for pest damage.

Sounds easy? Try peeling off the green “jacket” or hull to check for surface damage and then carefully manually cracking each nut without crushing the kernel.


·         Peach twig borer (PTB) and navel orangeworm (NOW) often like to infest the same nut. But NOW bores into the nut and PTB doesn’t. The NOW damage will cover over the PTB damage. NOW damage is represented by a webbing and powder-like remnants.
·         Ant damage is evident by the big bites taken out of the kernel – like something took a miniature melon ball spoon and took a scoop out, according to Jenna.


·        Leaffooted bugs will leave dark spots on the kernel

·        Peach twig borer leaves shallow channels and groves on the surface.
·         The Oriental fruit moth also produces shallow channels and surface groves.
Jenna’s assessment will indicate the amount of pest damage during the season. But it also lays the groundwork for next year’s pest management plan.

Cotton Season Turns with the August Winds in the Valley


Times are a changing in the cotton fields.

It’s mid-August now. To growers, this is the month of change for cotton. The hearty green and lush plants are shifting from making fruit to maturing and opening of the bolls, says Dr. Pete Goodell of UC Integrated Pest Management. Growers are making plans for the final irrigation before preparing for the fall harvest. 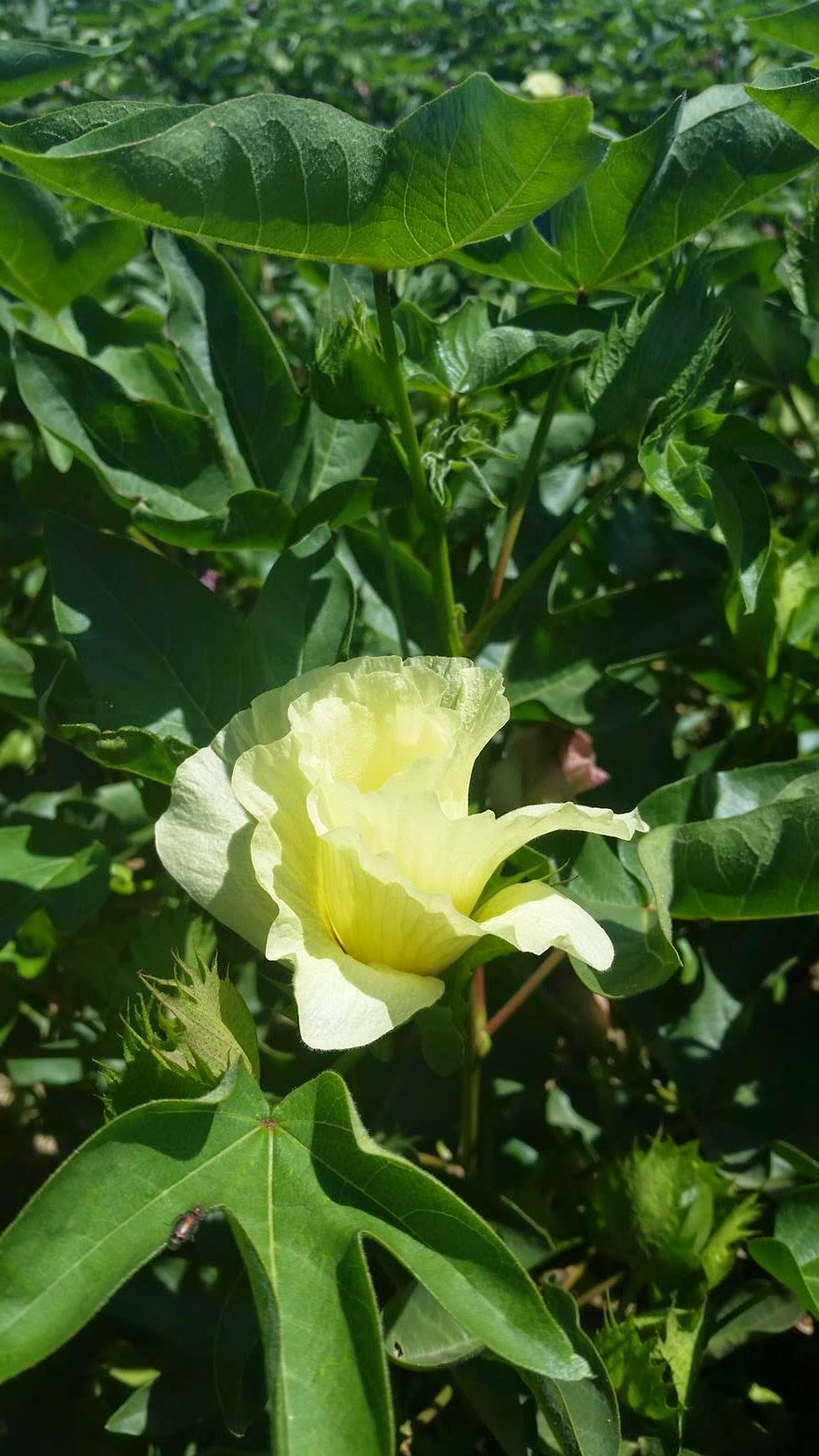 Carlos Silva  started monitoring the node above white (or yellow) flower (NAWF) to mark when cutout takes place. Cut-out is the plant shifts from vegetative to reproductive status.

During his scouting visits to fields last week, Carlos found plants to be more than halfway there to cut-out. (not sure when you mean, half the fields or al plants are 10 NAWF? Work with Carlos to get this right In fact, he even spotted a few open bolls on the bottom part of some plants.

When the plant has 3 (for Pima) or 5 (for Acala) NAWF, 95 percent of the yield has been set and new terminal growth has stopped. Growers can stop checking for lygus10 days after cut-out because bolls aren’t threatened by lygus bug damage 10 days after flowering.

Here’s what UC IPM says about measuring for cut-out:

Meanwhile, Carlos says pests are under control in cotton, but reminds growers to keep vigilant, especially with aphids and whiteflies coming into the picture as threats in the coming weeks.

Alfalfa growers are starting to harvest their crop and look for cutting to be in full swing this week.

Posted by Sustainable Farming Field Scouting at 6:32 PM No comments:

Cotton Crop Is Looking Good; But It’s No Time to Relax

While the drought has put a damper on cotton plantings this season, the plants themselves are developing well. Fruit set is very good.

Overall, growers are concentrating on seeing through the development of their crop and then preparing for the cotton picking time – from cutout to defoliation to harvest. It sometimes seems like an eternity getting to the day when the harvesters finally fire up.

The reason is simple: There’s still a lot to worry about and all kinds of things can happen in the field to hamper yield or the fiber quality, says Dr. Pete Goodell of the UC Integrated Pest Management program. “The issue is just finishing off the crop,” he says.

At the moment, lygus remains Public Enemy No. 1. Make sure lygus is under control and not hurting fruit set. “Be in the fields scouting at least twice a week,” Pete says.

August and September are big months to watch out for aphids and white flies.  “White flies and aphids will jump out on you when you least expect it,” Pete says. “Make sure these pest populations don’t build up where you can’t control them once the cotton lint opens up. Sticky cotton has become an issue and you want to make sure you prevent it.”

So far this season, some growers have treated their fields for lygus and even aphids. But Pete points out the pest problems are scattered across the Valley and usually vary from field to field.
Carlos says some fields were experiencing an uptick in lygus counts in the past week, approaching the UC IPM threshold for treatment. Other pests are in check right now.

You can check out the UC IPM website for more information about dealing with lygus as well as managing white fly and aphid in cotton.

Pete offers this final advice to growers: “Don’t go to sleep thinking that you’ve defoliated your cotton and it’s ready to go. Watch that crop through until it gets into the picker basket.”
It’s safe to assume cotton growers can expect a couple more months of sleepless nights.
Posted by Sustainable Farming Field Scouting at 9:41 PM No comments:

As we head into mid-summer, farmers are starting to feel and see some of the impact of the drought in the San Joaquin Valley.

We’re seeing it in almonds and alfalfa already and certainly we’ll be seeing it in cotton as well.
As field scout Jenna Horine discovered  three weeks ago, some growers on the far west side of the Valley started shaking nuts off their trees – a remarkable early start of the harvest since it was only mid-July. The nut shaking continued to move eastward the following week.
Almond expert David Doll of UC Cooperative Extension in Merced County indicates westside growers are trying to budget their water supplies this year. Like a checkbook, growers have only so much water in their account and need to balance irrigation before harvest and after harvest. In short, they need to save enough water for their crop next year. That means growers are moving quickly to get on with the harvest and move ahead with postharvest irrigation.

Here’s what UC Davis Terry Prichard, a water management specialist, says in a report on Irrigation Management of Almond Trees Under Drought Conditions: “The effect of water deficits during the postharvest period is substantially affected by preharvest conditions and the quantity of water left for the remainder of the season. With almond trees bud differentiation continues through mid-September. Severe water stress during bud differentiation has been found to dramatically reduce fruit set the following spring. In early harvest districts, more of the high water use season remains after harvest??. This increases the necessity of postharvest irrigation.”
For alfalfa, an earlier than normal end to the growing season looms because of tight water supplies. Some farmers have been irrigating for a fifth – and possibly final – harvest in a few weeks. In contrast, growers had enough water last year to extend their season into October.

Dr. Pete Goodell of the UC Integrated Pest Management program says the cotton crop is doing well despite the drought. Fruit set is good and pests are under control, for the moment.

With the lack of water, he says, “we are probably going to see an early season cutout or the crop will be taken out as early as possible.” Even if growers have adequate water supplies, they may not want to extend the season. This would allow white flies to develop later in the season and lead to sticky cotton problems.
“Sticky cotton has become an issue and you want to make sure you prevent it,” Pete adds.


Posted by Sustainable Farming Field Scouting at 7:49 PM No comments: