Mentioning the word “square” conjures up many thoughts and phrases.

There’s “Square peg in a round hole.” “Square deal.” “Fair and square.” “Square meal.” And my favorite: “Hip to Be Square,’’ the catchy hit song by Bay Area rocker Huey Lewis. 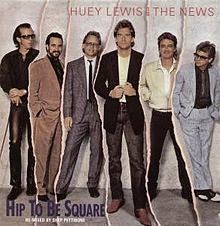 They’ll put you square on the fact the calendar indicates this is the time when the first squares start emerging on the cotton plants about a month into the season. Field scout Carlos Silva reports squares developing in early-planted fields.

The square is the flower bud of the plant. It signals the start of the reproductive growth period. The square becomes a bud, followed by blooming into a flower and eventually turning into a boll.

Essentially, the square is the beginning of what will become the fiber picked at harvest time. It’s the money for the bank. 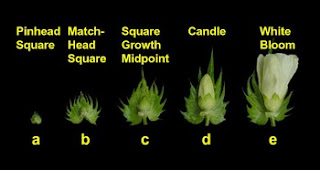 The first stage is a pinhead square. The next is a match-head square, which is described as one third growth. The last stage is called squaring. To have a successful crop, you need to have multiple squares per branch.
That’s why cotton experts stress that growers need to monitor their plant development. During early squaring, they should focus on plant vigor and square retention.

“Growers want to get off to a good start,” Carlos says. To growers, you might say it is “Hip to Have Squares.”

Meanwhile, Carlos reports the only pests showing up in numbers in the cotton fields are spider mites. The pest can cause the plant leaves to turn yellow or red and then fall off, which can hamper square maturity. Carlos is keeping an eye on some fields where mite populations could reach the treatment threshold.
In alfalfa, Carlos reports finding some weevils and alfalfa worms in fields, but not enough to warrant treatment. There are lots of beneficial insects living in the alfalfa fields. Growers should be harvesting again soon. Those growing alfalfa near cotton fields are reminded to leave uncut strips of alfalfa. This will provide habitat for lygus bugs and help keep them from heading into the cotton fields.

“Almonds are doing well. I’m not seeing a lot of nuts dropping,” Carlos adds. Pests are in check and the crop progressing “a few weeks ahead of schedule.”

Posted by Sustainable Farming Field Scouting at 7:06 PM No comments:

Getting an Early Take on Growth of Cotton Crop


Even though we’re only a month into the cotton season, this is a crucial time for the crop.
The first 30 to 40 days after planting determines the potential for the cotton crop by harvest time. Everything that takes place after the cotton plant stand is established will either maintain or decrease yields, according to UC IPM.

Carlos follows a formula that compares the plant population per foot with the seedling rate per foot. The results will indicate if the stand is weak, ideal or growing too vigorously.


These are steps UC IPM says growers should follow to estimate the plant population:

The best density rate also can depend on the variety and conditions. Higher densities may be better for plants growing in “low vigor situations.”

For weak stands, growers need to look for any seedling diseases or insects that could be causing the problem. Replanting should be considered for poor stands, including those with many adjacent rows without plants.

Excessive stands require thinning. UC IPM notes: “Dense plant populations, combined with conditions of adequate moisture and nutrients, can lead to rank growth, making the crop more vulnerable to insects and diseases. Depending on the cotton variety, a plant stand in excess of 60,000 plants per acre may require thinning.”

Right now, Carlos says most of his scouted fields fall in the optimal range. The plant populations fall within the 30,000 to 40,000 PPA range. “They’re in the ballpark.”
We’re sure growers are looking for a home run yield by fall.

Posted by Sustainable Farming Field Scouting at 10:00 AM No comments:

Economic $urvival: H2O Goes from One Crop to Another


It’s the farmer’s version of “Paying Peter to Pay Paul.”

In this case, the currency is California’s equivalent to liquid gold – aka H2O, agua, aqua or water. This practice could increase as we get deeper into the growing season, according to field scout Carlos Silva. 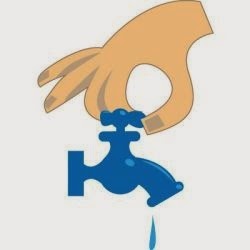 Carlos says one veteran grower already has turned off the water tap to one of his three alfalfa fields just a couple months into the season, which normally runs through the early fall. But the grower is settling for just three cuttings in this field so he can use that water allotment for more profitable crops. The choice is a matter of economical survival during an unprecedented drought
.
So far, other growers appear to be moving forward and irrigating their alfalfa as they prepare for their next harvest in the coming weeks. You might recall many growers last year indicated the alfalfa season could end by June due to lack of water. But they wound up securing enough water to make it through the fall. They might not be lucky this season because of a fourth straight dry year.
In the meantime, Carlos says pests have been under control in alfalfa. Aphids and weevils counts are relatively low. But the recent cool weather could lead to an increase in aphid counts.

Almond orchards also aren’t experiencing any significant pest threats. The same is true for cotton, Carlos points out. While he’s finding some mites in cotton, there have been enough thrips around to keep the mites in check.


While the dry winter and spring has pushed almond development about a month ahead of schedule this year, the cotton crop is following a rather normal growth pattern. That’s probably due to the mixture of hot and cool weather since cotton was planted last month. The seedlings are about four inches tall and averaging around four nodes.
Posted by Sustainable Farming Field Scouting at 8:37 PM No comments:

We see it around your house after you run into a hornet’s nest, sending the winged pest buzzing away. And we see around orchards after you stomp on an ant hill, sending the bugs skittering about.

That’s what happens when a home is disturbed. Why bring this up? There’s pest management lesson here for growers. And there’s also a reminder here about being a good neighbor

Every season, we point out that pests like their homes, whether it’s a dirt road or an alfalfa field. But when their safe havens get disturbed, they’ll quickly seek a new home.

Take almond orchards. Field scout Carlos Silva has found a small uptick in spider mites in almonds during his weekly monitoring. These pests are found in dry areas, including dirt roads. They can be driven into the trees by trucks kicking up dust on nearby roads.

Mites will damage foliage by sucking the cell contents from leaves. The leaves then turn yellow and drop, which ultimately reduces the crop and vegetative tree growth the following year.

To help control mites, growers regularly water down roads along the orchard margins to keep dust down. This is where being a good neighbor comes into play: Slow down when driving on roads next to almond orchards. That will be important as the weather heats up, which will make it a challenge to keep dust down.
The good neighbor policy also applies to alfalfa growers whose crop borders a cotton field. Alfalfa is an ideal host for lygus bugs, which are no threat to the crop. When their home is disturbed, the pests will migrate to a new place, namely cotton. Lygus are a threat to the cotton crop from early squaring through boll set and can cause all sorts of damage – from square dropping to bolls failing to mature. Carlos says lygus numbers have been on the rise in alfalfa recently.

So here’s the hitch: Alfalfa is harvested many times during the season – on average about once of month. That means lygus can be on the move roughly every 30 days.
Dr. Pete Goodell, a UC IPM advisor and cotton and alfalfa expert, says a good solution to stem the migration of lygus to neighboring cotton fields is to leave uncut strips of alfalfa during harvest. Lygus will travel to these strips and stay there until the next irrigation cycle. The bugs will then go back to the larger alfalfa field as the plants start growing again.

Right now, alfalfa growers have finished their second cutting of the season and have been irrigating the crop. The next harvest should come around the end of May. Goodell tells us that leaving uncut strips is vital from June to July because that time period is a critical stage for cotton development.
UC IPM offers these tips about border-strip strip harvesting: “Leave 10 to 14 foot wide uncut strips adjacent to every other irrigation border (or levee).

“At the subsequent harvest, cut half of the width of the existing strip going into one windrow and the other half going into a second windrow to give a 50:50 blend of new and old hay. These windrows are then each combined with a windrow of newly cut (100 percent new) alfalfa making a blend of 25 percent old hay and 75 percent new hay.

“This technique minimizes quality problems from the older hay. Specific blends of old and new hay have been found not to significantly impact forage quality compared to 100 percent new growth alfalfa in most cases.”
Posted by Sustainable Farming Field Scouting at 10:22 PM 1 comment: