Let’s Talk Ants, Almonds and Colonization in the Orchard


You remember last week when Jenna mentioned spotting lots of ants parading around some almond orchard floors during her scouting rounds in the Valley.

Well, this is the prime time for growers to head into their orchards, put on their census bureau hats and start taking count of this pest. This is the optimum time to detect ant damage, says veteran entomologist and almond expert Walt Bentley, UC IPM emeritus. You certainly don’t want ants colonizing your orchards come summertime.

Sometimes, growers don’t even know they have an ant problem because nests could be hidden by a cover crop or other things. There are many reasons for ants to build up. Some include the trend toward drip irrigation and microsprinklers as well as drought conditions and warm winters. Ants like to live around moist conditions.

The major concern is at harvest time when almonds are shaken off the trees to dry. Ants can get into an open shell and eat at the kernel. Soft shell varieties such as Nonpareils and Fritz are the most vulnerable.

How do you tell if you have an ant problem?

You should be looking at a 1,000 square foot area in the orchard, Walt says. “If you start getting eight or nine colonies in that 1,000 square feet then you probably need to manage the ants, particularly if you have soft shell varieties,” he tells us. The Almond Doctor – UC extension advisor David Doll of Merced County – has made available a handy UC IPM ant colony monitoring form for growers to use.

Ideally, the best time to control ants is in late winter or early spring when ant nests are shallow. As the weather gets warmer, ants will burrow deeper into the ground. Ant bait is considered the preferred method to control the pests. You want to take care of the pest before harvest. Check the http://www.ipm.ucdavis.edu/PMG/r3300411.html for more information about dealing with ants.

In other observations, Walt points out some almond growers may have been lax in orchard sanitation this past year. Walt’s a vocal advocate for getting rid of mummy nuts during the winter to avoid problems with navel orangeworm.  “We had a couple of good years where the navel orangeworm was very low.  Because of that, you can get a little complacent.” The result, Walt says, is “you may see a bit of an uptick in navel orangeworm this season.” 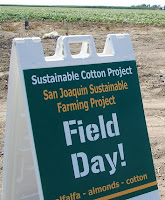 Field Day Alert: An impressive line-up of UC experts are lined up for a Cotton Field Day on Wednesday, June 5 from 10 a.m. to noon at the McCurdy Farm on Highway 33 in Firebaugh. Go to the Sustainable Cotton Project website for directions. The speakers are: Dr. Pete Goodell for a cotton pest management update; Steve Wright of UCCE in Tulare on herbicide resistance; Dan Munk of UCCE Fresno on cotton production risks in low water years; and UC cotton extension specialist Dr. Bob Hutmacher. Tell a friend and neighbor.

Posted by Sustainable Farming Field Scouting at 5:51 PM No comments:

We all know about Habitat for Humanity – the charity that gathers community members to build homes for the less fortunate.

Did you know San Joaquin Valley alfalfa growers boast their own version? Call it Habitat for Entomology. Yes, these growers “build” homes for a diversity of good bugs and crop-damaging pests.

Of course, we’re not talking about brick and mortar or hammer and nail type of homes. We’re looking speaking of 8- to 12-feet wide, hundreds of feet long swaths of fresh alfalfa.

In farmer parlance, it’s called strip cutting. And this time of year, we’re joining University of California extension advisors in spreading the word to alfalfa growers to start making plans for leaving uncut strips of alfalfa as habit to attract natural predators as well as pests, including the dreaded lygus.

Dr. Pete Goodell, a UC Integrated Pest Management advisor and cotton expert, says the first fruit, or square, on the young cotton plants are starting to emerge. Pests living in the alfalfa fields will flee to nearby cotton fields as the crop is cut and harvested.

Let’s put it another way. If you lose your home to fire or an earthquake, the first thing you do is find another house to live in. Well, that’s the same thing pests such as mites and lygus do when their home – i.e. alfalfa field – is cut down every few weeks through the fall. Mites and lygus – which are rather fond of alfalfa – are troublesome pests to cotton. (Check out Dr. Goodell’s blog for more information about lygus.)

So we remind alfalfa growers to leave a “home,” or strips of uncut alfalfa as a habitat to attract natural predators such as green lacewings and parasitic bugs and provide a place for lygus to stay until the alfalfa grows back. Right now, growers are in their second cutting of the season for alfalfa. They haven’t been leaving strips so far – some may figure pests fleeing the alfalfa haven’t been a threat yet to cotton.

But field scout Carlos Silva and Dr. Goodell visited some cotton fields last week and found most plants were at five to six nodes and a few even have developed the first square, which signals the plant is entering an important growing stage that ultimately determines yield potential. The young plants are looking good and are about five to six inches tall.
As growers move into the second cutting of alfalfa, Carlos reports no significant pest issues at the moment. Alfalfa aphids have pretty much gone away. Some have weevils. He’ll starting looking for other pests soon such as beet armyworms.

Almond field scout Jenna Horine says she has found some orchard locations with nuts damaged by leaffooted bugs. As we mentioned previously, leaffooted and green stick bugs will leave a gummy substance on the outside of the nuts. But day-night temperature swings can affect nuts and result in similar gumming as well. To determine pest damage, you have to cut the nut in half.

Jenna says the pest damage is rather spotty and doesn’t appear to be a major problem overall. Check out UC IPM online to learn about controls for the leaffooted bug.

In the meantime, Jenna reports a rather large number of ants crawling around orchard floors. This is the time for growers to check their orchards for ant colonies to determine if there is a need for treatment. It’s best to tackle ant problems now to limit damage and crop loss after shaking this summer. In the northern San Joaquin Valley, growers should survey for ants two to three days after irrigation around this time and in June. You can learn more about monitoring and treatment decisions for ants from UC IPM.

Posted by Sustainable Farming Field Scouting at 7:45 PM No comments:

Nothing Cliché about Judging the Almond Pest Threat

On occasion, though, one fits perfectly. Take “You can’t judge a book by its cover.” Then take a good look at this almond:

Judging by the cover (in this case the green outer shell), the gumming on this nut could be could be a sign of leaffooted bug damage. Here’s what UC Integrated Pest Management says:  “Feeding by adult leaffooted bugs on young nuts before the shell hardens … may cause the nut to gum internally, resulting in a bump or gumming on the shell.”

Around the Kerman area west of Fresno, growers have seen similar gumming on outside of the young nuts. But uncover the inside and there aren’t signs of damage by leaffooted bugs.

What’s the story? In checking with almond expert Walt Bentley, UC IPM emeritus, the sapping is probably due to wide temperature variations with high temperatures in the 90s and nighttime lows in the 50s. That can cause the oozing. So you can’t judge a nut by its cover. Feel free to check in with our  almond scout Jenna Horine if you have questions about your nuts. She can put you in contact with Walt Bentley if it likes like there is a problem.

Almond growers are happy that the gusty winds we’ve been having finally died down. Many have been holding off treatments so they don’t have to worry about spray drift.

In the cotton fields, the young plants are in the three to fifth node. The crop looks good with no pest threats at this time. But growers still need to monitor for spider mites and thrips.


This week, alfalfa growers should be in the second harvest of the season. Aphid counts are low. That’s good. Soon, we’ll be reminding growers about strip cutting to provide a habitat for pests and keep them out of neighboring cotton fields. That’s our Good Neighbor policy.

Posted by Sustainable Farming Field Scouting at 9:48 PM No comments:

Farmers can certainly get worked up when talk turns to bugs and bucks.

The buzz among alfalfa growers in the Central Valley this season has centered on the pesky blue alfalfa aphid, which feed on alfalfa stems and can lead to wilting and stunted growth. These deep green-blue invasive bugs – which can be confused with the pea aphid – were particularly troublesome this spring.

Indeed, Pete and our alfalfa-cotton field scout Carlos Silva saw the problem first hand while touring local alfalfa fields recently. This field looked like the alfalfa had just been cut for the first time this season. The only problem: the first cutting came about a month earlier. That spells revenue loss.

According to Larry, the blue alfalfa aphid was first found in alfalfa near Bakersfield in 1974. The following year, this invasive pest from eastern and southwester Asia was discovered throughout Southern California. Today, this aphid can be found as far east as Kansas and Oklahoma.

In the San Joaquin Valley, pest control advisors indicated during the field day that treatments weren’t totally effective this spring. So far, there are no definitive answers to the treatment issue or the root of the blue alfalfa aphid outbreak.

On the bright side, Carlos says he has recorded low counts of blue alfalfa aphids during his field sweeps. The spate of hot weather could be an ally for the rest of this year. These pests thrive in 60 degree weather. When the thermometer reaches 75 to 80 degrees the blue alfalfa aphid population decreases quickly. That’s one good thing about these 90-degree days. Although temperatures dipped into the high 70s the past few days, weather forecasts say the weather should quickly head back into the 80s. We can probably say wait till next year for these aphids.

In the meantime, growers are poised to do the second alfalfa cutting of the season. One farmer, in fact, already wrapped up his second harvest.

On the cotton front, the young plants are basking in the hot sunshine and growing rapidly.  Cotton stand development is good. The seedlings are growing nicely with some plants reaching first true leaf, which is the time the plants start developing squares.


Cotton growers need to keep an eye out on thrips, spider mites and whiteflies.  So far, there are no major pest problems to be worried about at this time.  Keeping check back here for field updates throughout the season.