Some Growers Could Fetch Lower Returns for their Almonds This Season

There’s been a lot of chatter circulating on social media, in coffee shops and other gathering spots frequented by almond growers.

The talk around town centers on early reports from almond hullers that their crop experienced more pest damage than anticipated.

“They’re getting higher pest damage numbers than they thought. Growers don’t know what’s going on. It’s very puzzling to them,” field scout Jenna Mayfield reports. “It affects the price they get,” Jenna says.

Perhaps puffers from neighboring areas skewed the results in the grower’s pest traps. You might call it the almond version of a false positive report (meaning while pest control advisers and growers found fewer NOW eggs in the traps there were really a lot more crop damaging pests out in the orchard).

These puffers have been around for some two decades to control pests in tree crops across California. They are considered labor-saving technology.

The puffers are hung on tree branches and placed around the orchard. The canisters often will spray pheromone doses on a 12- or 24-hour schedule.

Some studies indicate the puffers alone won’t significantly reduce NOW damage in almonds. They are most effective when combined with soft pesticide treatments. University of California researchers estimate mating disruption systems are used on more than 200,000 acres of almonds and pistachios across the state.

“MD (mating disruption) can work, but needs careful monitoring and large-scale cooperation between neighbors to work well across an entire area,” according to a 2012 article by Franz Niederholzer, a UC Cooperative Extension farm advisor for Colusa, Yuba and Sutter counties.

This is where the good neighbor policy comes in handy.

Posted by Sustainable Farming Field Scouting at 7:50 PM No comments:

Harvest Thunders Ahead After Storm Roars Through Valley

You would have thought autumn had already arrived last week after fall-like weather roared through the northern San Joaquin Valley, knocking down power lines, trees and fences – as well cotton bolls in the fields and almonds in the trees. Toss in a bit of rain and you have yourself some weird weather. 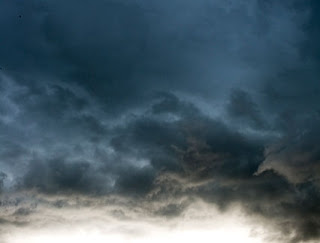 Despite the thunderstorm and gusty winds, almonds and cotton emerged pretty much unscathed, according to field scouts Jenna Mayfield and Damien Jelen.

“There was a lot of rain in Firebaugh. Some bolls came off the cotton plants,” Damien says.

Jenna points out almond trees are used to being jostled. Mechanical shakers roughhouse trees more than a little wind, she says.Still, some nuts were blown off the trees. But in a way, Mother Nature helped some growers with orchard sanitation by knocking off would-be mummy nuts.

For certain, the thunderstorm generated a little coffee shop talk and a small diversion from the daily chores. Now back to reality. 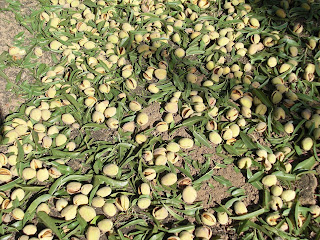 Later this fall, Jenna will get cracking on examining the samples to check on the amount of pest damage experienced in project orchards. This evaluation will help growers with their pest management plans next season.

Right now, spider mites have exploded in orchards. Mites reproduce quickly during the warm summer months and produce eight to 10 generations each season. The pests will damage the foliage, butthe problems show up next season – reduced crop yield and vegetative growth. 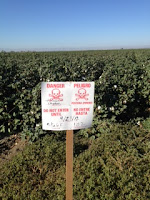 In cotton, growers continue to ramp up defoliation activities, Damien says. Fields are treated twice before the plants dry out enough for harvest. About two weeks after the final treatment, the cotton is ready to be picked. October certainly will be a busy month for harvesters.


Meanwhile, Damien reminds growers to stay vigilant for aphids, white fly and mites, which can lead to sticky cotton. “You continue to worry about these pests until the plants are defoliated.”

Posted by Sustainable Farming Field Scouting at 8:09 AM No comments:

By land and By Air: Cotton Growers Start Defoliating Fields Across the Valley


These days, you might see spray rigs driving through green cotton fields. Or you might find airplanes buzzing over the fields around the Valley.
These sights, says field scout Damien Jelen, are the defoliation of the cotton fields.

While some began the process last week, Damien says more growers are ramping up this week and spraying defoliates on their cotton fields.

This flurry of activity signals that the fall harvest is around the corner.
Damien expects some harvesters to start picking cotton by the end of this month. “We can expect the harvest to go through Halloween.”

Why do growers defoliate their cotton fields?

Defoliation is the last major field management decision that will affect the financial outcome of the crop. This process is necessary to prepare the crop for mechanical picking.

Defoliants are used to boost leaf drop and drying of the plant, which increases the timeliness and efficiency of the harvest. Growers that terminate their crop early are often trying to head off potential sticky cotton damage caused by growing white fly or aphid populations.

Successful defoliation can improve cotton grades by lessening staining and trash from the leaves, make harvesting faster, speed up drying, delay boll rot and even boost boll opening.
Some experts consider the proper timing for defoliation more of an art than a science. Crop maturity, field conditions, and the environment are factors that go into deciding when to defoliate.

Here’s what UC IPM considers the best conditions for defoliation:
Growers can ask their pest control advisors and UC extension specialists for recommendations about defoliant products and application rates.

Posted by Sustainable Farming Field Scouting at 8:00 AM No comments:


It’s so hot that almonds are literally drying on the trees, reports a sun-baked field scout Jenna Mayfield. Talk about dry roasted almonds!

“Everyone is dealing with the heat,” Jenna says. “The temperature doesn’t drop very much at night.”

As August came to a close, the National Weather Service reported the Fresno area averaged 99.4 degreesfor the month. Triple digit temperatures dominated the final week of August and the start of September. We finally caught a break this week with temperatures dipping under the century mark.

“The almonds are drying in the trees because of the hot weather. It makes it pretty easy to shake the nuts off the trees,” Jenna says.

Heat waves are no surprise for the San Joaquin Valley. But this weather certainly stands out. For instance, the region hit a high of 109 on August 28, breaking the previous record of 108 degrees set in 1924. The 109 reached on the 29th tied the record high first set in 1915.

In some ways, the string of triple-digit temperatures is helping growers with orchard sanitation. The reason: More nuts are coming off the trees during mechanical shaking, improving the odds that growers won’t have to shake the trees a second time or come back to knock off mummy nuts in the winter.

“This is an excellent way to do all your orchard sanitation at one time,” Jenna says. “You want to stay on top of this issue from now until mid-February.”

Normally, almonds often stay on the ground for a few days to dry. However, they should be swept up and hauled to the huller as soon as possible to avoid damage from pests, especially ants.

“I’ve seen so many ants. Growers are trying to pick up the nuts as fast as they can,” Jenna says.


But there is one problem, especially for smaller almond operations. Many of the same equipment operators who work in the almond orchards run equipment for other Valley crops. And once crews become available they often go to work first with the largerfarms before going to the smaller operations.

Jenna says it’s not unusual to see nuts lying on the ground for a number of days, waiting for a sweeper to become available to work the orchard. Such is the life of the little farmer.

Posted by Sustainable Farming Field Scouting at 2:42 PM No comments: