Editor’s note: We welcome long-time entomologist and retired University of California Statewide Integrated Pest Management advisor Walt Bentley as our guest blogger this week.
Almond growers are in the middle of their winter chores as they start preparing for the upcoming season. Here are some tips and a wintertime to-do list:
Orchard sanitation remains important to control navel orangeworm and defend against aflatoxin contamination. Head into the orchard and check for mummy nut loads, where NOW can get their foothold. Remove and destroy those mummy nuts.
Trees should be cleaned to less than two mummies per tree by this Friday in the Sacramento Valley, and fewer in the San Joaquin Valley where winter storms or bird and squirrel activity are not adequate for natural removal of the mummies. Blow or sweep fallen mummy nuts to the row center and destroy them by discing or flail mowing by March 15 where ground cover is not present. Moist orchard floor conditions provided by winter-resident vegetation and rain will enhance mortality of navel orangeworms in mummy nuts that have fallen from trees, according to the UC IPM website.
Check for San Jose scale, especially if you have been off a dormant oil program. While fewer orchards from Fresno north have been experiencing this problem, scale will surface from time to time. The UC IPM website, local extension farm advisor or your pest control advisor can help you examine for San Jose scale. Growers who participate in the San Joaquin Sustainable Farming Project receive helpful information about dealing with scale as well.
Look for wintering leaffooted plant bugs. Walk through the orchard and look for that pest, which can be up to an inch long with spiked leaf-like protrusions on their hind legs. The bugs will aggregate under sheltered areas and large trees and they don’t move around during the winter. If you find an aggregation, follow them throughout the winter to estimate the mortality and spring population density, according the UC almond experts. Around mid-March when the pests start looking for food, growers need to start monitoring for dropped nutlets. UC IPM points out that there are no treatment thresholds for this pest in almonds.

“If bugs and their damage are evident, consider a treatment. Chemical control generally targets the overwintering adults that have migrated into the orchard with April or May applications.”

Remember, the winter rains will cause muddy conditions in the orchards. To avoid soil compaction, let the orchard dry out a couple days before driving through with a tractor.

Posted by Sustainable Farming Field Scouting at 5:29 PM No comments:

As Central Valley farmers start mapping out plans for their crops for the New Year, they do so with an eye to the sky. So far, the early winter storms and snowfall in the Sierra Nevada are putting a little twinkle in their eyes.

Here’s why: state Department of Water Resources surveyors took a trek up Echo Summit a few days into 2013 and took their first measurements of the Sierra snowpack. The good news is the statewide water content came in at 134 percent of average for this time of year. Moreover, the snowpack is almost half way to the April 1 average – the date when the snowpack usually hits its peak before the spring melt.

Why is this important? Well, the snowpack provides about one-third of the water for our farms as well as residences and businesses. Last year, thanks to a series of late spring storms, farmers south of the Delta received a 40 percent water allocation from the Bureau of Reclamation. 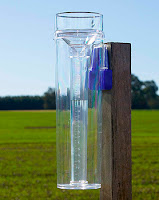 “It is valuable to watch the rainfall patterns between November and May.  Remember the 2012-13 rainy season is being labeled “La Nada” because of a weak El Ninõ situation and the resulting unpredictability in the existing weather pattern. Rainfall amount and duration during late autumn, winter and early spring is the largest determinant of potential lygus severity the following summer.”
Remember to check your rain gauges and keep those rain boots handy.

Posted by Sustainable Farming Field Scouting at 5:30 PM No comments: