As we head into October and cooler fall weather, alfalfa growers are wrapping the year with the final cutting of the season.

Some are looking to squeeze in one more cutting. Field scout Carlos Silva reports seeing a few growers irrigating their alfalfa field, trying to coax more growth for another cutting this fall. If successful, that could bring some extra money for the year.

This year, about 900,000 acres of alfalfa was projected to be harvested across the state, down 50,000 acres from 2012, according to the USDA’s National Agricultural Statistics Service in California. Production is forecast at 6.3 million tons, down 4 percent from 2012. But yield per acre is projected at 3.13 tons an acre this year compared to 3.01 tons in 2012.

Overall, California produces roughly 9 percent of the nation’s alfalfa hay with an annual value of nearly $1 billion. Fresno and Merced counties are among the top producing counties.

So far, farmers are getting about the same price per ton – an average of $200 – as in 2012, according to Friday’s USDA California Hay Report. Premium quality is selling for $230 a ton while the contract price for supreme is $285 a ton. Hey, doesn’t this sound like we’re talking about gasoline for cars rather than forage for cattle.

Few outside the ag community probably know there are different grades of alfalfa – just like a lot of commodities such as cotton and almonds. 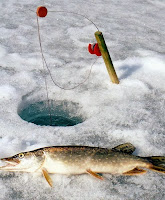 Over the years, there has been talk about some growers opting for quality over yield. They have planted dormant alfalfa varieties in the northern San Joaquin Valley and Sacramento Valley. These varieties are normally grown in places like Minnesota – a state known for ice fishing and International Falls, a city that averages 15 degrees in January.

University of California extension advisor and alfalfa expert Dan Putman says the trade-off with dormant varieties is yield – as much as 1 to 2½ tons per acre. The gamble pays off in down years for prices, meaning premiums are bigger for higher quality alfalfa.

Experts say planting dormant varieties could make sense for growers that are targeting the dairy industry. In the end, of course, it all boils down to commodity prices.


In the meantime, Carlos reports most cotton growers have finished defoliating their fields. The cotton plants are drying up nicely, showing rich, white puffy lint. Growers are moving ahead with their harvesting plans. Soon, we’ll be hearing those cotton harvesters humming along in the fields.


The arrival of fall means cotton picking time is around the corner.

Across the Valley, cotton growers are preparing the final step before it’s time to pick the fiber. We’re talking about using harvest aids to defoliate the cotton plants in the field.

Our cotton and alfalfa field scout Carlos Silva reports that some growers have started applying defoliants and more farmers expect to begin treatments this week. Caution signs warning workers and the public about the upcoming chemical applications are popping up along the border of the fields every day. (A few days of steady winds last week forced some growers to postpone applications.) Two to three weeks after defoliation, the crop will be ready for picking.

To the uninitiated, defoliation is the typical cotton production management practice designed to prepare the crop for harvest and boost the quality of the fiber.


Defoliation helps the mature bolls open fully and ensures that  lint is free from leaves and other trash.  On the other hand, immature bolls will stay immature. The treatment causes the leaves to drop and plant to start drying. This helps the harvesting machines pick the cotton cleanly off the plants and lessen the amount of leaves and debris (we call it trash) collected during the harvest.

Cotton experts like to describe defoliation as an art and a science. Defoliate too soon and your yields could suffer because of an abundance of immature bolls. Defoliate too late and you could suffer insect damage. A lot dollars are hinging on making the right decision. To read more about this topic, go to UC IPM online and check out timing cotton defoliation. 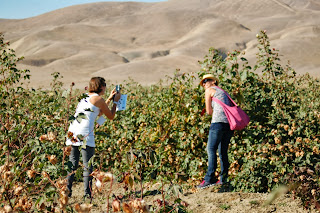 The annual Cotton Tour is coming up next month. This popular free event is a unique opportunity to get an inside look at cotton production – from the field to the gin. Set for Tuesday, October 29, from 8:30 a.m. to 5 p.m., the tour begins at the Best Western Apricot Inn at Interstate 5 and West Panoche Road, about 23 miles southwest of Firebaugh. Go to the Sustainable Cotton Project website  to reserve a spot. Spread the word to your friends. Space is limited.

Posted by Sustainable Farming Field Scouting at 10:35 AM 2 comments:


With fall around the corner, almond growers are on the home stretch of this year’s harvest.
Shakers are making their rounds and shaking the last of the nuts off the trees in the San Joaquin Valley.

Retired entomologist and University of California Integrated Pest Management specialist Walt Bentley sent us a note last week reminding us to tell growers that this is the time to collect nut samples off the ground. Here’s his advice:

“Take 200 to 500 nuts from each orchard to examine them for damage. They can be stored in a freezer until time permits for examining them. Farmers need to crack these out themselves. This will give valuable information for next year’s approach to pest management. I found that the crackouts really identify the damage incurred and keeps a farmer from making wrong assumption about pests.”

Our almond field scout Jenna Horine has spent recent weeks collecting nut samples for growers participating in the San Joaquin Sustainable Farming Project. Jenna has been taking nuts from areas that have pest traps. She’ll be cracking them and recording her findings for growers in the coming weeks. We’ll let you know the results later this fall.

Walt points out that growers won’t be kicking back after the nuts are hauled away. Autumn is an ideal time to prepare for next season. He offers a few more tips for the fall: “Look for dead or dying branches in trees. Then examine the wood for San Jose scale. This helps in the determination of dormant oil needs.  Dormant oil is the best approach in the winter for San Jose scale control. It also is the least disruptive.”

Thanks for the advice Walt.

Meanwhile, cotton field scout Carlos Silva reports  growers are getting closer to defoliation. He finds plants in many fields are in the range of three to five nodes above cracked boll (NACB). UC IPM says growers can schedule defoliation at:

Carlos says the white fly counts are up, but generally not at the threshold for treatment. However, a couple growers have been plagued with white flies this season and have treated their fields a number of times.  Our experts haven’t figured out the reason for the persistent problem. Remember that white flies can lead to sticky cotton.

In alfalfa, spotted alfalfa and pea aphids are showing up in greater numbers. Carlos says the numbers are still below the treatment threshold and suggests growers continue to monitoring their fields as they prepare for the last cutting for the season. Some alfalfa growers are hoping to get an additional cutting – if the weather cooperates. Forecasters predict cooler weather ahead by the end of the week with temperatures dropping into the 80s. Historically, the early fall brings welcome relief from the scorching summer heat. 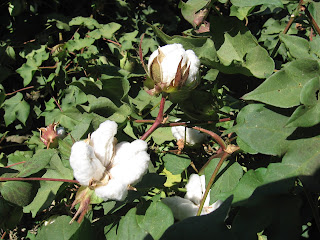 Yes indeed, ’tis the season for cotton fields across the San Joaquin Valley to start emerging with color as cotton bolls open up to reveal the bright fiber glistening in the backdrop of the deep green plants.
While this is a sight to behold, growers won’t be resting until after harvest. Right now, they will remain vigilant about protecting their crop from pests and taking steps to maximize yields. They’re hoping that pests will remain in check and there’s no need to spend more money on treatment.

Whiteflies and aphids top the watch list. These pests are the main culprits for gumming up the fiber and bottom line due to sticky cotton. During the late summer and fall, these two pests will secrete a sugary substance on cotton plants, which can impact an open boll. Sooty mold develops on the fiber, creating what we call sticky cotton. The result is a poor grade in quality.

Field scout Carlos Silva is finding whiteflies to be worrisome at the moment. So far, their number hasn’t reached the threshold for treatment in most fields.

Of course, this is farming and there are bound to be exceptions. A couple of growers have experience persistent problems with whiteflies and have had to treat for the pest a number of times. In fact, one grower has sprayed his field four times already. The reason for the nagging whitefly problem is unclear. It could be nearby melon and seed alfalfa fields are contributing to this issue.
Right now, cotton growers are developing plans for defoliation. Some predict that process will start in two to four weeks with harvest coming about a month later.

Meanwhile, Carlos reports alfalfa and pea aphid counts are increasing in alfalfa fields – although the numbers don’t warrant treatment at the moment. He’s finding beneficial insects – primarily green lacewings and lady bugs – are in healthy numbers. That will help control the aphid populations. In the coming week, we can expect growers to perform the final cutting of the season – although some will try to squeeze out one more cutting in the fall. It’s hard to believe another alfalfa season is coming to an end.
Of course, that means the cotton harvest is just around the corner.